Surf Club golf course is one of Myrtle Beach’s most revered courses, particularly by those who know the area golf scene well. Built in 1959, Surf Club grew into a private club but has opened up a limited number of tee times for Myrtle Beach public play in 2011.

Given that the course hasn’t been available for public play in recent years, Surf Club is an unknown quantity to many Myrtle Beach golfers, but there is much to like. Here are five things you need to know about Surf Club:

1. You want to play it: Surf Club is Myrtle Beach’s third oldest golf course and one of its best. Public tee times are limited but outside guests will be treated like members and the golf is outstanding. Surf Club is a course you will tell your friends at home about. Holes 10 and 18 are routinely ranked among the Grand Strand’s best.

2. Expect to play fast: Because Surf Club remains, ostensibly, a private facility, there is an emphasis on maintaining a good pace of play. Players won’t be rushed, but a relatively fast round of golf is a good one, especially if you want to play 36. Expect to play in four hours or less, seriously. Membership has its privileges.

4. Keep it in play: The multi-tiered greens complexes at Surf Club present the course’s greatest challenge but getting the ball in play off the tee is vital. Nearly every fairway is tree-lined and the undulation in the greens enhances the importance of accuracy off the tee, which puts players into position to hit a good approach.

5. Diversity is the spice of life: What makes Surf Club great? No two holes are alike – aside from the hardwood trees. The course is a testament to the enduring nature of good architecture. The design and shape of each hole, in addition to the greens, are individually unique, making Surf Club an enjoyable round of golf. 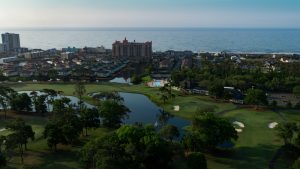 Staff Spotlight – Pam Richardson
An “Anonymous” Package with Top-Name Golf and Lodg...
The Best Value Courses on the Grand Strand