Golf Digest has ranked the layout among America’s 100 Greatest Public Golf Courses, it’s a 4.5-star facility, and Golf Magazine ranked it as the second best golf course in the South.

With its list of accolades, players expect a memorable round and True Blue delivers.

Due in large part to the judicious use of waste bunkers, True Blue is one of the area’s most visually stunning layouts. The fairways, most of them framed by white sand, are upwards of 100 yards wide.

Strantz’s bunkering can create visual deception but there is always ample room to land the ball.

“Golf is a game of targets and the possibilities to move the ball around on this course are endless,” True Blue’s director of golf, Bob Seganti, said. “If you don’t keep your focus there is intimidation with the waste bunkers.”

Seganti’s advice: pick a target, commit to it and take a big rip because True Blue encourages players to use the driver.

Players enjoy even more latitude off the tee when one takes into account the room provided by the waste bunkers (regardless of your score, you shouldn’t lose a lot of balls). But the size of the landing areas are complemented by the course’s gargantuan greens, and therein lies much of True Blue’s challenge.

Hitting greens isn’t difficult, but navigating the long, breaking putts that follow is a stern test. Players that minimize their three-putts should score well.

Speaking of challenges, Strantz opted to test players immediately. The course’s first four holes are its toughest stretch. The opening gauntlet includes a pair of par 5s and an island green par 3, so spending a few minutes on the facility’s 16-acre practice facility is recommended.

Some of the difficulty relents after the first four holes, and Strantz gives players the opportunity to close the opening nine in style.

True Blue’s easiest hole is the double dogleg, par 5 ninth hole. The doglegs aren’t extreme and players that can carry their drive to the bottom area in front of the waste bunker on the right (cutting part of the dogleg) can get home in two. No hole at True Blue has yielded more birdies and eagles.

There aren’t nearly as many red numbers surrendered but the 18th is an outstanding finishing hole. With the clubhouse and its distinctive blue roof overlooking the green, the final hole at True Blue leaves players with a memory befitting a course of its stature. 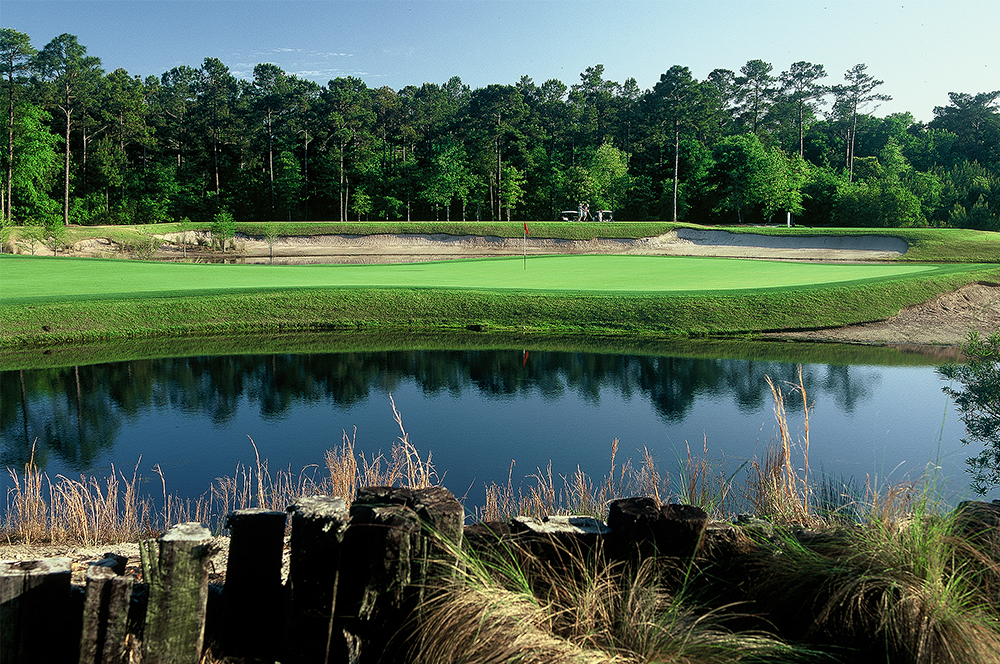