Originally from “above” the Mason-Dixon Line, John Venters has lived in historic Wilmington, NC (the family home) for over 50 years.

Thirty-four of those were spent traveling the Carolinas as a golf manufacturer’s representative, starting back when the “Grand Strand” consisted of fewer than twenty golf courses! Along with his father and brother, the Venters’ represented several well-known golf companies in the Carolinas and Virginia, for over 30 years.

Get to know John:

How long have you been working for Coastal Golfaway?

I have been working in the industry for about 40 years and I’ve been with Coastal Golfaway for the last 10 years.

What do you like about working in the golf industry?

I like everything about it. I like the people involved and being around the game. Plus, my dad got into the business when I was in Junior High School and it caught my interest.

Where is your favorite Wilmington-based golf course?

My favorite Wilmington course is Cape Fear Country Club because it is a classic Donald Ross course that is maintained the way it should be. I don’t play it as much it often enough, but it’s a real treat. It’s never crowded and you can play at your own pace. 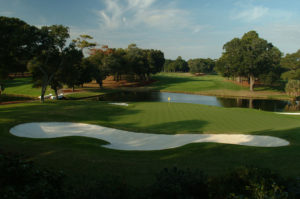 The Dunes Club. I called on them for so many years and I got to see all the changes and events that went on. Also, I am a Trent Jones fan. That course is as good as it gets.

Why should someone take a golf trip?

Guys just need to get out and play golf in a different place. If they live in a part of the country that’s not on the coast, it’s much different. And they get the type of camaraderie that comes with going on a trip with your buds.

Tell us a funny golf story?

I was playing with Mike Schmidt down in Hilton Head after his celebrity event. It was a cold and miserable day in early November and I hit this shot off a terrible lie. The ball just went up about four feet and Mike turned around and looked at me like I had just hit a home run off him. I’ll never forget that look.

My sand wedge. I have a lot of confidence in it.

Who has the best golf game at Coastal Golfaway?